Four dollars and sixty-one cents. As the clock ticked toward midnight on New Year’s Eve of 2017, I pulled up my trusty Google Spreadsheet where I keep track of all the income and expenses for the Certified Comic Shop. I entered in my last sales for the day, input a couple of formulas and then looked at the Grand Total cell which informed me that I had ended the year as profitable business. I was officially $4.61 in the black for 2017!

Now, four whole dollars and change may not seem like much to you, but to me I was excited as could be! Not only did I not lose money (which is nice), but I had built some solid momentum heading in to 2018, which will be my first full year as a comic shop proprietor.

When I set out to start this little venture ten months ago, I really wasn’t sure what to expect. All I knew is that I had a dream, and I was willing to chase it. Of course I had set some strict rules to follow in place, and I credit those rules to helping me end the year on a positive note.

If you’ve been following along with me here on my blog, then you may know that every other month I give a comprehensive financial update on how my comic shop has been performing. The last one I did was for October & November, but instead of doing one for December, I thought it would be more fun to look back at 2017 as a whole so you could see how I got here to be rolling in almost five dollars worth of cold hard cash!

Now me bragging about my $4.61 profit for the year is mostly tongue-in-cheek – clearly I had more revenue than that. I just did a really good job reinvesting my cash flow in the shop in the form of inventory, CGC grading, comic pressing, shipping supplies, the occasional comic book raffle, and assorted subscriptions and fees.

Let’s roll up the sleeves, grab a Red Bull and start doing some math!

When I look back at the income that I generated the ten months that my comic shop was active for 2017, it feels very satisfying. Remember, at this point the Certified Comic Shop is a side gig. I still have my full time job that I work at 40-50 hours a week, plus a family of three (soon to be four!).

I only do shop related activities during the late nights or early mornings when the kids are still asleep and on the weekends.

In my regular monthly reports, I provide a detailed list off all the comics I sold for the month, how much each sold for and what the net profit was per order. For the year end wrap up, I’m just going to touch on the big numbers. If you want to review the comic by comic breakdowns for each month, you can find them here.

When I set out on this journey to open a comic shop, I didn’t set any specific sales goals. I just wanted to sell enough comics to prove that this can be a viable side gig with the opportunity to become a full time job within 3-5 years.

Based on the first ten months, I think it’s safe to say that the dream is indeed possible. I’ll talk more about my goals for 2018 a little later on in this post, but I truly feel the future is looking bright.

Now the hard part (or fun part depending on your perspective). Let’s look at the expenses I incurred for 2017 and wave bye-bye to that nice chunk of change I earned selling comics.

As I mentioned, the goal at this point isn’t to pay myself at the end of the year. Every penny I make needs to be reinvested into the shop to keep the business growing.

That being said, I think for 2018 I need to be a bit more mindful of how I spend my money. Let’s break it down!

I won’t lie, it’s hard to look at this chart. There are some expenses there, particularly in the comic book inventory row, that I’d like to take back.

When I decided to become a comic shop owner, I made the mental transition to stop being a collector of comics, and focus solely on being a seller of comics. I had to do this because I knew that my comic collection at the time was going to have to be sold off book by book in order to pay for this very website, shipping supplies, software and various services to name a few. So I had to mentally detach myself from these comics. Especially the ones I still had from the 80’s and 90’s that I had purchased as a teenager and had owned for the past 25-30 years or so.

Now just because I’m not “collecting” comics any longer, that doesn’t mean I’m not constantly buying comics. Quite the contrary. As you can see in the table above comic book acquisition was my single highest line item for 2017. The difference is, the comics I was buying were either raw comics that I’d ship off to CGC for grading or already graded comics that I felt I could quickly flip for a tidy little profit.

So while I did end up making money off of the books I bought, I did buy some that I still haven’t done anything with. For 2018 I really need to focus on being more strategic with my purchases and ensure that I get them ready to be sold in a timely manner. 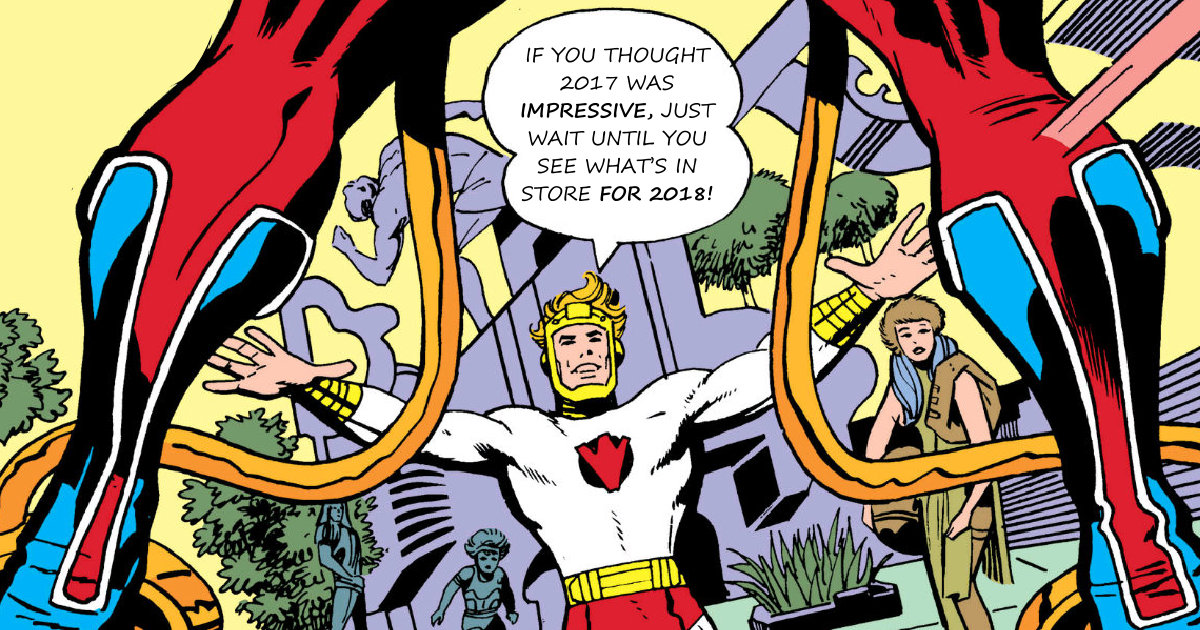 When it comes to being successful at anything in life, be it personal or professional, having goals is a big part of that. My goal for 2018 isn’t necessarily one that’s based on revenue. It’s simply by the end of the year be consistently having one order come in per day.

Not to spoil anything, but in January 2018 I got close with 22 orders in 31 days. I’m looking forward to keep that momentum rolling and hopefully when I do my annual financial report next year I’ll be able to say I achieved my goal!

To wrap things up on a personal note, I just wanted to take the time to thank each and every one of you who I’ve gotten a chance to interact with the first ten months of owning a comic shop. I’ve met a lot of awesome fellow comic nerds through Instagram, Twitter & YouTube and this very website. I hope you all find my transparency and willingness to help useful, because I have no plans to stop!

If you have any questions, or want to know more about any specific aspect of running an online comic shop, feel free to ask in the comments section below. Happy New Year and I’ll talk to you soon!

Speaking a Different Dialect of Geek on the Domain Name Wire Podcast
September 23, 2019

Why I Include A Free Comic Book With Every Order
November 3, 2017